A friend on Facebook, Wa’ed Ghantous, from Haifa, just published this post and I’m sharing it on my blog.

Her sister took this photo today, November 28th, 2016, of a T-shirt wore by an Israeli, most probably a soldier, on the train between Jaffa to Tel Aviv. The T-shirt reads (in Hebrew):

“When earthquake happens and the Indians hit, every Arab mother will cry.”

Worth noting, the term “Indians” is a common name to refer to the Golani Brigade, which is an elite worrier army unit in the Israeli military, that participated in all Israeli wars.

The use the “Indians” in this context, to indicate a thirst for murder is also very disturbing, outrageous and offensive to the Native Americans.

“When earthquake happens and the Indians hit, every Arab mother will cry.”

END_OF_DOCUMENT_TOKEN_TO_BE_REPLACED

The Palestinian National Theatre “Al Hakawati” published today an appeal to Jerusalem institutions and businessmen in the city to save the theatre from closure during the next 48 hours.

According to the theatre’s statement, director Amer Khalil, received a phone call on Thursday morning 11/26/2015 from the Israeli Enforcement and Collection Authority (ECA), responsible for debt collection and law enforcement, notifying him on the intention to complete the seizure of the theatre building in 48 hours.

The statement also added that two weeks ago the Israeli ECA seized the bank account of the theatre and handed a notification on the building seizure to the director.

Since then, the management tried to appeal to many bodies seeking financial support in order to be able to cover its amounting debt to the Israeli authorities (including the municipality, National Insurance and electricity company), so far for no avail, according to the statement. 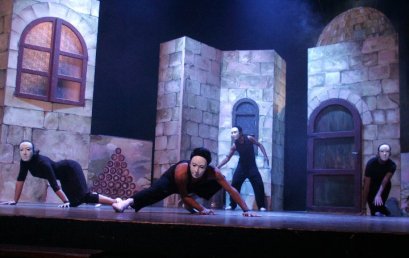 To many this could be seem as a normal procedure of a state collecting debt from citizens, however, in Jerusalem’s complex situation and the vulnerability of Palestinian institutions under the Israeli occupation and oppression machinery, the issue becomes political par excellence.

Al Hakawati theatre is the only remaining Palestinian theatre and one of the few remaining cultural institutions in Jerusalem, after prolonged Israeli  destruction of Palestinian cultural and political life in the city. Located in the center of Jerusalem, the Palestinian National Theatre ( founded in 1984), became an important pillar and a center for Palestinian culture and art. END_OF_DOCUMENT_TOKEN_TO_BE_REPLACED

Here are two statements by Netanyahu, from the last two days, with regards to Palestinian citizens’ protests against the murder of Khair Hamdan, a Palestinian youth by Israeli police:

Quote 1 “We won’t tolerate disturbances and riots. We will take action against stone throwers, those who block traffic arteries, and those who call for establishing a Palestinian state in place of the State of Israel. Whoever doesn’t respect Israeli law will be punished to the fullest extent. I will direct the interior minister to consider stripping the citizenship of those who call for the destruction of the State of Israel.”

Quote 2 “To all those who demonstrate against Israel and in favor of a Palestinian state, I say something simple: I invite you to move there; we won’t give you any problem”

In a non twisted world like ours, this man should be outlawed, for legitimizing the killing of Palestinians, and for advocating their transfer.

So let’s make some order here:

What you call “disturbances and riots”, will keep happening, because no people in the world will tolerate oppression and colonization.

People will keep protesting against occupation forces and bullets’ throwers, those who block and deny our rights and those who call and act to drive us out of our lands and replace it with a superior Jewish state. We will direct our souls to stay steadfast and resilient.

If you are not happy with that, we say something simple: We invite you to move from our lands, we won’t give you any problem.

Pope Francis stops to pray  at Israel’s separation and annexation Wall in Bethlehem.

Of course these images will not change the reality, nor the Pope visit will. But they show a reality that can not be ignored, or whitewashed.

END_OF_DOCUMENT_TOKEN_TO_BE_REPLACED

Lately I’ve been going to Jenin every 2-3 weeks with family members. We usually do our vegetable shopping in the city market.

Last Saturday, on our way back from Jenin to Nazareth, we were surprised to find a new technology to check the “suspected” cars at the Israeli checkpoint.

The checkpoint’s check usually goes like this: There are about six lines of cars going out through the checkpoint, on each there is 1-2 “security” officers that ask for IDs, and decide whether this car including, its riders, do or do not consist a major threat to Israel’s “security” and “existence”. If they do not, the officer gives the car a white ticket, which means they are done with the “security” check. If yes, then the car gets a green ticket. Once you get the green one, you have to go to the far right route into a special check. You are asked to open all doors, take out all your belongings and go through physical check while the car is been checked separately. END_OF_DOCUMENT_TOKEN_TO_BE_REPLACED

Richard Goldstone could give those guys at AIPAC a run for their money. So misleading was his recent whitewash in the New York Times on the apparent slander “Israeli Apartheid,” that hasbara peddlers everywhere were taking his picture off their dartboards and putting them on their mantles. END_OF_DOCUMENT_TOKEN_TO_BE_REPLACED

This morning Mr. President you are so popular in Israel. You are the king of Israel. You did great job. It will be such a shame if you lose the next elections after such a speech.

While you where speaking at the UN, Ahed Wahdan, a 15-year-old Palestinian boy who was shot yesterday by Israeli soldiers with rubber bullet in his eye, listened to you. END_OF_DOCUMENT_TOKEN_TO_BE_REPLACED

Palestinian activists, accompanied by Israeli and international supporters demonstrated today at military checkpoints under the slogan “knocking on Jerusalem’s gates’ in the campaign called ‘Olive Revolution’. This was an attempt to march to Jerusalem to attend the last Friday of Ramadan’s prayer. The peaceful march at Qalandia was blocked by Israeli army heavily armed and we couldn’t walk through. After a while we were attacked. Tear gas and sound bombs were shot at demonstrators, many injures and some arrests. END_OF_DOCUMENT_TOKEN_TO_BE_REPLACED

Although some Israelis are calling for making a clear connection to Israel’s occupation, the July 14 movement for “social justice” is far from endorsing a position on this, for many reasons.