We can’t ignore the rising interest by the media to report about the so called “migrant crisis”. There are mushrooming reports about their plight, particularly the Syrian refugees, and lots of reporting about the warm welcome by Europeans. This was not the case two weeks ago. Some people believe that two events marked the shift: the suffocation of 71 refugees in a truck in Austria, and the photos of the little child found dead on a Turkish beach. 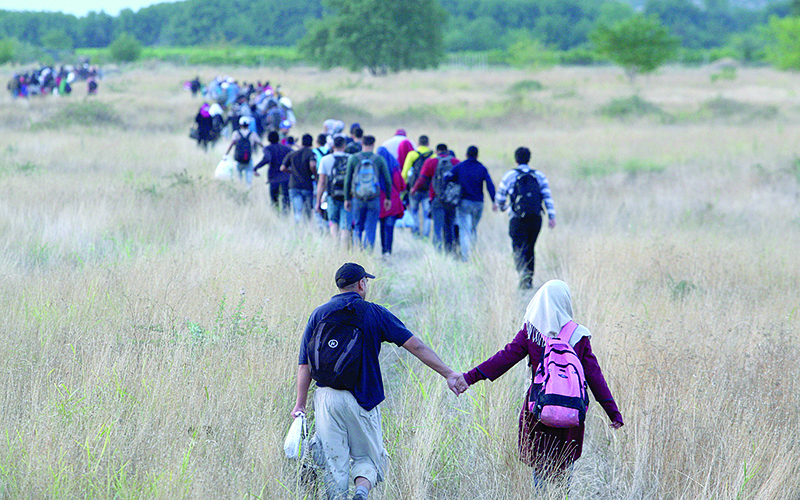 Migrants pass through the border from Greece into Macedonia. Photo by AFP

Mainstream Media’s reports about refugees are flooding our screens, welcoming refugees’ initiatives intensifying, they spread all over Europe and voilà, Political decisions are announced to ease the reception of refugees in Europe.

If we want to think politics, these are not coincidences. There must be a political interest/agenda that we do not hear about in the media.

I appreciate the civil initiatives by Europeans in different countries to welcome refugees and assist them. I believe there are lots of good intentions out there. One thing keeps amazes me though, no matter how European countries are responsible for many of the destruction in the Middle East and Africa, they always end up the “saviors”, the white saviors, which reminds me of a typical hollywood movie.

And lastly, on the media coverage of the refugees.

It’s important to report the stories of refugees, who have fled a war, been exploited by nasty smugglers/human traffickers, probably seen death many times, experienced cold, hunger, humiliation and horror. It’s important that the media report this, but why does it have always to be a pitying approach? The approach of the privileged towards the poor?

These refugees have dignity, and their dignity was stolen enough times through out their journey, I’m not sure catching their broken moments on camera is the way to retain their dignity. If the aim is to promote mercy, I suggest you promote a political and social responsibility.

These refugees carry their own experiences, expertise, careers, education, knowledge, culture and so on. To treat them as the poor people who need nothing but a shelter in the European heaven is an alarm on how will they be treated in the hosting country.

In addition, there are many refugees who are fleeing from Afghanistan and Iraq (and many African countries). Many of them take the same roots along with Syrians. Why is the media ignoring them instead of shedding light on their suffer in addition to the Syrians? Is it to create hierarchy of privilege/suffer? Is it to avoid any discussion about the West direct responsibility in the destruction of those countries? Is it less sensational now? Other reasons?