Last Thursday, another layer from Israel’s democratic mask, was removed.

On that day, a demonstration took place in support of Palestinian prisoners in Ramleh prison, especially Bilal Diab,Thaer Halahleh, Hassan Safadi, Omar Abu Shalal, Jaafar Izz al-Din, and Mahmoud Sarsak, they have been on hunger strike since one\2 months, and hospitalized in Ramleh prison’s hospital, in critical condition.

The protestors were surrounded by police fences, we were far away of the main street, almost invisible to the public and I doubt the prisoners could hear our chants.

After one hour chanting, a group of activists was gathering to go home, when blocked by the special unit of the police “Yasam”, in few minutes a bigger force joined, from now on, it became a nightmare. They started beating and pushing us back to the sidewalk, our flags were taken and torn, I tried to hold my flag so tight, but they were pulling it so strong, and I felt I will be trampled over if I don’t let go. While beating us, the Yasam officers were also assaulting verbally and cursing, I tweeted one of their curses and I’d rather no repeat it again. 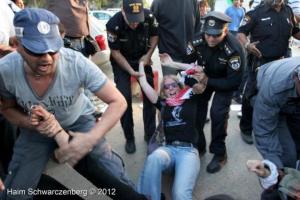 During this massive and severe assault, they arrested seven activists, Palestinians, Israelis and foreigners including a Palestinian minor from Haifa, 16 years old. It was a moment when you don’t know what to do, you see your friends getting arrested, and you want to be with them, on the other hand you want to be out in order to give them a back.

After calming down, we decided to go to the Ramleh police station where the arrestees were taken in order to be there for them, take care of lawyers, documentation and more.

At the police station’s compound of Ramleh there is a courtyard where families and people related to any arrestees can sit and wait. We were at the beginning ten people, mostly women, making phone calls or sitting silently waiting for the others to join. Fifteen minutes later, they decided they don’t want us here and care to kick us outside the compound. We argued and asked, their only explanation was that we “disturb” them.
The lawyer advised us to leave and avoid any further troubles. While we were moving out, they arrested another activist.

Some others joined and we sat about twenty people outside the compound on the sidewalk. They came again, asking us to leave again. We refused, stated that this is a main street, a public place and we have the right to be there, and sat on the ground. All of the sudden, the number of Yasam and police officers mushroomed, they started pushing and beating again. This time the brutality was even much more severe, one of the officers used the tazer (electric shocker) against some of us, and then he refused to identify himself to our request, something he is obliged to, according the written law. We were all beaten, and another nine others were arrested.

At the same time, the lawyer, Palestinian female, was also beaten inside and kicked out of the compound.
The whole incident lasted few minutes; we sat on the sidewalk, totally shocked, many of us with pains and bruises, trying to digest what happened, and to name the people who were arrested. We also realized that because all of us were attacked, no one could take photos or videos to document what happened.
Another few activists joined us, to discover that the number of arrestees was doubled. Their bus driver was taken by police officer for some time. We assumed they wanted him to say that he drove the people here to the police station in order to make a protest, so they would accuse the latest round of arrestees of illegal assembly. And we were right.

After a while other lawyers arrived and they were allowed in. In the outside, the nightmare did not end, it just became ridiculous. As we remained sitting on the sidewalk of the main street next to the police compound, they came every while and asked us to leave, and when we refused they picked two or three of us, held them for 20-30 minutes and gave them reports for causing noise. The reports said they were playing with musical instruments on the street, singing and causing noise!

During the night we heard screams from the inside, we received information later on, which was confirmed by the arrestees after being able to meet the lawyers that they went through horror inside the station. They were beaten, tazered, insulted, some of them got spits at their faces or slapped, and some of the female arrestees reported sexual harassment. For 14 days, they are not allowed to speak about that, but sooner or later, it will come out.

No one did anything, not threatening the policemen or the public order. Officers were so racist and full of hatred; they wanted to punish us for daring to speak about Palestine. Their attack was simply because they didn’t like the fact that in their territory, someone is daring to commit this “terrible crime” of supporting Palestinian prisoners, chanting for them, and the worst of all, raising the Palestinian flag.

The next day, the 17 arrestees were taken to court. The judge did not accept the prosecution request to keep them for another 4-5 days and decided to release them on bail to house arrest for three days, while for the next 30 days they are banned to come close to Ramleh prison or police station, and in the next 14 days they are prohibited from making any contact with anyone who was involved or attended the demonstration, that include “Likes” on facebook and “tags” on twitter.

The freedom of speech in Israel is guaranteed as long as you do not challenge the system, and exceed the Zionist boundaries. It is always the Palestinian community’s or the anti Zionist radical activists’ activities that are met with brutality. 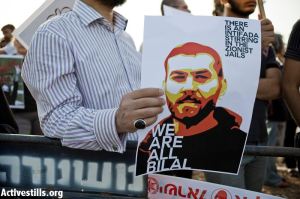 When you read this account, try to think for a moment: if that is how Israel treats its own citizens in a civil court, how it would be treating Palestinians from OPT, under military judicial system. Our story was out, while no one is interested to hear about the stories of thousands of Palestinian detainees and prisoners.

We went to Ramleh to protest for those thousands of Palestinian prisoners in Israeli occupation jails, 2000 of them are on their 19th day of hunger strike, six of them are close to death. This is what matters now. Sleeping one night in a dirty room at prison and some bruises are nothing comparing to years of imprisonment under Apartheid regime that has no respect to Palestinian lives and dignity.

Take and action and support the Palestinian prisoners’ hunger strike.

4 thoughts on “Read about Oppression, Act for Prisoners”