Last Friday, the Israeli army adopted, for the first time in the village of Nabi saleh, the well known US military communication tactic of embedded journalism during its was on Iraq. This is probably another desperate attempt by the Israeli Hasbara, that is failing to keep dominating, distorting or hiding facts.

Embedded foreign and Israeli journalists arrived with military jeeps to Nabi Saleh village’s weekly protest, including Hagai Segal, who was a member of the “Jewish Underground”, a terrorist organization that was active in the 1980s. Two Israeli activists, who attend the weekly protests of Nabi Saleh, recognized Segal and confirmed it was him.

In 1984, Segal was convicted by Israeli court for his terrorist activity and sentenced to five years in prison, he was then granted reduction into three years, and then got released in two years (after a third cut of his term). Segal is currently a columnist in the right paper ‘Makor Rishon’ and in Maariv newspaper and website.

One have mixed feelings about this. Why would I care about one terrorist while we have the state terrorism agents every week in the village. On the other hand, this is someone who was convicted by his own country as a terrorist, but still respected to the extent he gets the army protection to enter Palestinian villages. The question remains: why would the army bring this terrorist with them to Nabi Saleh???? 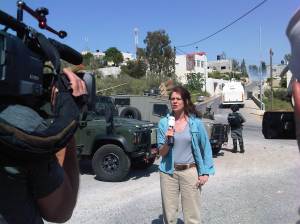 Another embedded journalist was the correspondent for NOS, Dutch Radio and Television, whom I spoke with and asked why would she accept the invitation of the army, while she could come cover Nabi Saleh demonstrations whenever she wishes without anyone’s custody. She said she was interested in this new army’s method and wanted to speak about it in her report. Myself and another protester explained to her that today, and probably because of her presence, the army is behaving with some restraint and that is not the usual scene here.

Indeed, the army showed some restraint in the beginning, and used different tactics like deploying in the middle of the village instead of the entrance as they normally do. But soldiers couldn’t hold this restraint much and they turned again into shooting tear gas, rubber coated bullets and spraying skunk water at protesters and houses. Later on, they starting beating and arresting protesters, including Bilal Tamimi, the local photographer who is doing a great job in documenting the weekly demonstrations and the regular army night raids to the village. Tamimi was beaten by the army (see min 7:35 in this video), his camera and glasses were broken and he is still under detention at Ofer military prison.