Following the news on the tragic accident today on Jaba road near Ramallah, due to clash of track with school bus, where at least nine children and one teacher were killed and tens were injuried, Israeli comments on facebook, were inhumane to say the least.

Comments on Israeli news website Walla’s post on it’s Facebook page about the accident, showed despicable satisfaction and celebration by Israelis and a disgraceful wish there will be more of such: 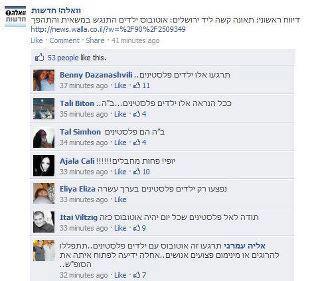 Benny: Calm down, they are Palestinian Children.

Tali: It seems like they are Palestinian children.. Thank God..

Tal: Thank God they are Palestinians

Eliya: Only Palestinian children were injured about ten.

Itai: Thank God its Palestinians, let it be such bus every day.

Aleyah: calm down, Its a bus with Palestinian children, lets pray there will be deaths, or at least severe injuries, this is great news to start the day with.

Please note the likes on each one of the racist and hateful comments.

And no one tells me this is exception and not the Israeli mainstream. 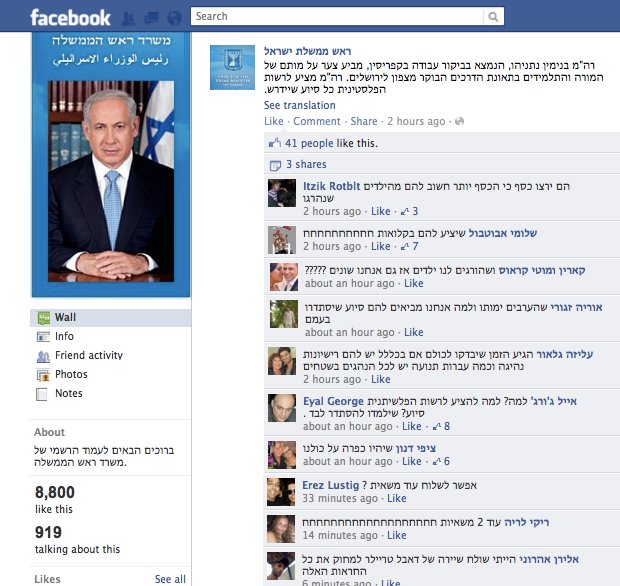 Here is the translation of some racist and gloating comments on his statement offering aid for PA:

Itzik: They will ask for money, since money is more important for them than children who died.

Shlomi: He should offer them Baklawa* hhhhhhhhhhhhh

Aourya: Let the Arabs die, why would we offer them help, let them handle it themselves

Erez: Can we send another trailer?

Eliran: I would send a convoy of double trailers to wipe out all these shits

*Baklawa is an Arab sweet, served usually in joyful events

Haaretz reported yesterday on these racist comments including similar ones on the Israeli police Facebook page, which could not be found.