Today, I attended with other comrades the weekly protest in the Palestinian village of Qaryout, south of Nablus. Qaryout hs joined the popular resistance last Friday. The village held in the past numerous marches and protests to resist the occupation and the settlements. This time, they are hoping to persist with the weekly protest.

After we lost our way for a while, we arrived to Qaryout, it’s a beautiful village located on a beautiful landscape, the only environmental hazard there, is the Israeli colonies.

As we arrived a little before the start of the rally, we had the chance to hear from some leaders briefing about the village and see some videos and pictures from last week.

Qaryout, inhabits 2800 residents, 68% of its land were confiscated to the advantage of the surrounding three Israeli settlements, Shilo, Aleh, Shvut Rachel. Recently another new outpost-settlement called “Adi Ad” was installed.

Protesting in Palestinian villages could be in many cases a risk of life, in Qaryout the risk is double. Settlers, the “landlords” are armed, they walk freely everywhere, just dare talk with them. Sometimes you don’t even need to, they come. According to the villagers, last Wednesday a settler entered the village with his car, and shot live bullets at a boy, but he did not hit him.

Last Friday Qaryout protestors managed to open it. And where hoping to get to their lands today in order to plant trees. The piece of the road they managed to pave was ordered by the army to be removed.

Quite often hundreds of settlers come to hang around on the remaining-still of their hands-lands of Qaryout, accompanied by the army.

In Qaryout you find the absurd of armed thieves behaving as landlords, while the owners of the lands might reach a level where the occupying army would be there only protection from those terrorists. While we were marching towards the lands, tear gas was shot and live bullets at the air. When we got closer we realized it was the settlers who shot. Not the army. We passed a settlement, and kept progressing. At some point, a jeep with four-five armed settlers was approaching from behind; they left only after the army went and talked with them so nicely. But they kept coming back and forth.

When we reach the army, who blocked us from approaching the lands, it was absurd; the army negotiating from the front, group of settlers standing and provoking behind them, some armed settlers with guns approaching and provoking from the back, others came down the hill, others stood up on the hill, all armed. It is as if you have to chose, and with those armed terrorists, you don’t want to take risk, they can shoot any moment. 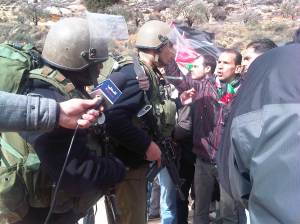 When we couldn’t approach the lands, people planted some trees on the road side. One settler uprooted one, burned it and threw it at protesters. Another settler attacked verbally and almost physically protestors, under the eyes of the soldiers who have done nothing.

On the way back to the village, settlers threw stones at us, the young men of the village responded with stones, guess who got the tear gas and rubber bullets?

To summarize, the essence of apartheid is demonstrated very well in Qaryout: The colonialists walk freely, protected by the occupying army, and they are above the law. Palestinians, the land owners, with no access to their lands, and their rights are stepped over by no law.

4 thoughts on “The essence of Apartheid in Qaryout village”

Observations of a tired sOul.

deep-rooted reflections on my circles of life