This Friday, the weekly rally in the village of Nabi Saleh had a different smell for some of us.

We arrived early morning and learned that the Israeli army just left the village, after a raid that started at 2am. They raided more than ten houses using dogs, terrorized the families and children and detained three residents, Anan (15), Mahdi (20) and Khaled (27).

Despite the heavy rain and freezing cold there was a good turn out. The demonstration started as usual after the Friday’s noon prayer. Minutes before the demo started, heavy rain began. However we all walked, chanted and sang while shivering and freezing.

Usually we walk towards the entrance of the village in an attempt to reach the spring through the main road, at the entrance the soldiers wait for us, the moment we are 200m away, they start shooting tear gas directly towards us. Today, for the first time ever, they did not shoot tear gas at all, and we managed to get closer than usual. But they were ‘kind enough’ to spray us with the skunk water, which never reached us due to the strong wind and rain. Even when the rain stopped, the wind would still move the water away from us.

We were about 20 people, mostly women, at the front, 20-30m from the soldiers and the skunk water’s truck, still no tear gas. “How come?”, “What’s is wrong with them?” we asked ourselves. In fact, many of us, became addicted to tear gas, we need to inhale it every week.

Even when the Shabab-youth of the village started throwing stones from far away, the army did not respond. All of the sudden, the stones no longer “endanger” life . Soldiers could survive it without using arms.

There were two debated reasons for why we are not going to get our weekly dose of tear gas. One, that there was an American delegation of lawyers and scholars who were visiting Nabi Saleh and present at the rally. The other reason, also possible, that the tear gas will not work in this windy and rainy weather.

So, completely wet, shivering and freezing, we dared to come closer, to the closest point were the skunk water can’t reach us. It was very close. And this, it turned out, was the trap. The skunk pulled full gas, moved towards us and started spraying, everyone started running, but it was too late, we all got showered all over. The hair, body, clothes. Shitty and stinky smell was all over. If you ask me, I would rather inhale tear gas all day, even get rubber bullet than getting one drop of skunk water. 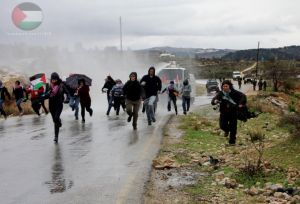 When the skunk stopped, it was one of the craziest scenes we viewed. We started all laughing, joking and hugging each other. We even started hugging those who did not get sprayed so we pass for them some of the ‘grace’. And that’s how the demonstration ended. No one could bear his\her or others’ smell and just wanted to rush back home.

Before saying good bye, people of Nabi Saleh advised us to scrub our hair with tomato and our skin with water and salt.

On our way back, we were four stinky people in the car and could not open the window since it was raining & freezing. We made fun of ourselves for the rest of the day. One decided to call us his “skunk comrades”, another created the hashtag #SmelllikeAThawri” (Thawri for revolutionary), one said her mother threw her shoes outside the house, another, who got the skunk via a hug, demanded a new jacket. One expected a long week with lots of tomatoes, and another wanted to give stinky hugs to everyone.

I think this picture with a quote of one of us says it all: “We Palestinians are crazy & Israeli army is right in hating us, we are skunked but still laughing & hugging”

It will take at least one week until the smell gets away of our bodies, and perhaps we will continue to joke about it for sometime, I guess because we understand that this is not our biggest problem. What really stinks is the occupation, and that’s the smell we want to get rid of. 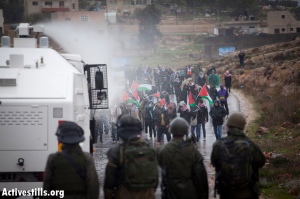 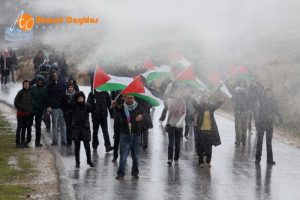